How does cancer start?

How does cancer start? 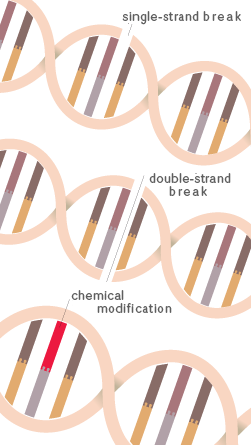 Our body is made of cells that have genetic material (DNA), which as the name suggests, contains our genes.

Genes are the commands that tell cells how to behave. They act like an instruction manual for the body. This is why DNA is often called “the book of life”.

Genes are the instructions that tell cells how to behave, and ultimately how the body works.

Carcinogenesis results from errors in the DNA (mutations ) that change the instructions given to the cell.

However, for a cell to degenerate and turn cancerous it normally needs not one, but many mutations accumulating over time.

The body also has several fail-safe mechanisms to correct these DNA errors before they cause problems. A lot has to go wrong before cancer appears.

As we grow old, though, our chances of developing the disease increase.
Mutations can accumulate, while the body is also working less efficiently, making more errors and repairing them less well.
This is why after our 50th birthday we are advised to start regularly checking for early signs of many types of cancers, such as colorectal or breast cancer.

But why are cancer cells so dangerous?

In a healthy tissue or organ the number of cells is stable, with its optimal quantity controlled by signals from other cells. Cancer cells, however, do not respond to these signals and multiply without control, forming tumors (abnormal masses of cells).

Tumors are dangerous because they occupy the space of healthy cells and, as a result, can affect the normal function of an organ or tissue.

Not all tumors are dangerous though. Warts and moles, for examples, are benign tumors. Benign tumors can also become too big, compressing nearby organs and even affecting their function, but are easily removed and tend to not grow back.

Malignant tumors (the ones behind cancer) are much more dangerous, and often fatal, because they have another troubling ability. Their cells can break off from the original site and travel to other areas of the body creating new tumors. This ability is called metastasis.

Metastatic cancers are often fatal because once malignant cells start traveling it is difficult to know where they will end up. This makes their full eradication much harder, if not impossible.

Learn   what is a mutation , and why each case of cancer has unique characteristics .